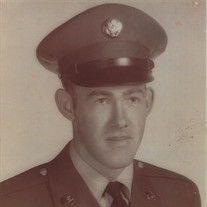 Virgil Ezekiel Davis, 79, of Trenton passed away Saturday, October 27, 2018. Mr. Davis was born to Richard and Mary Louise Davis on November 29, 1938. He served in the United States Army. Mr. Davis was a mechanic for the Levy County School... View Obituary & Service Information

The family of Virgil Ezekiel Davis created this Life Tributes page to make it easy to share your memories.

Send flowers to the Davis family.