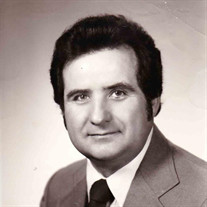 Therman Eugene Proffit, 81, of Fanning Springs, Florida, passed away on February 17, 2022. He was born on March 7, 1940, in Lily, Kentucky, to the late Charles and Ruby Proffit. As a small child, he moved to Hamilton, Ohio, where he later graduated from Hamilton High School. He moved to Florida with his wife and children because of a job and ended up spending most of his career and retirement in Florida. Therman’s career started by pushing an ice cream cart at the age of 15 and ended as a Franchise Business Consultant with the Great American Cookie Company, where he spent close to 40 years traveling all across the United States as well as many countries around the world. He never met a stranger, had many friends, and was loved by all. He is survived by his wife of 61 years, Alyce, his son, Mike (Lora), two daughters, Debbie Tinsley (Ken) and Cathy Latner (Travis), six granddaughters, Trisha Tinsley, Brittney Proffit, Heather Tinsley, Ana Tinsley, Mia Tinsley, and Shyann Latner, one sister, Loretta Hill, and many nieces and nephews. He was preceded in death by his late parents and his four sisters, Catherine Fongdong, Shirley O’Connell, Wilma Crank, and Mary Ellen Sturbaum. A Funeral Service will be held at the Old Town United Methodist Church in Old Town, Florida, on February 27, 2022 at 3 PM, with Carl Rainear and James Howes officiating. Visitation will take place at the church one hour prior to the service and burial will follow at the Old Town Cemetery. In lieu of flowers, donations may be made to the Old Town United Methodist Church or the American Cancer Society. Arrangements have been placed under the care of the Rick Gooding Funeral Home Cross City Chapel, with locations in Cross City 352-498-5400 and Chiefland 352-493-0050. Please sign the online guest book at rickgoodingfuneralhomes.com

Therman Eugene Proffit, 81, of Fanning Springs, Florida, passed away on February 17, 2022. He was born on March 7, 1940, in Lily, Kentucky, to the late Charles and Ruby Proffit. As a small child, he moved to Hamilton, Ohio, where he later graduated... View Obituary & Service Information

The family of Therman Eugene Proffit created this Life Tributes page to make it easy to share your memories.

Send flowers to the Proffit family.