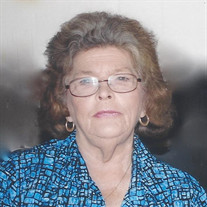 SARAH VIVIAN ROBERTS, 74, of Cross City, Florida, passed away Friday, March 31, 2017. Sarah was born on May 2, 1942 in Cross City, FL to the late Perry and Mattie Lou Hill. She was a teacher’s aide for 17 at Anderson Elementary School, retiring in 2003. She enjoyed taking care of her children and grandchildren and when she could she like to fish. She was a member of New Prospect Baptist Church. She is survived by her husband of 56 years and 7 months, Charles Roberts of Cross City; sons, Charles Edward (Debby) Roberts, David Keith Roberts and Shane Leslie (Natalie) Roberts all of Old Town; brothers, Sidney (Judy) Hill of Perry, Larry Galen Hill and Jerry (Faith) Hill of Cross City; sisters, Ann Brannin of Old Town, Janice Parrott of Cross City, Joyce (James) Davis of Cross City, Helen (Cookie) Liles of Old Town and Shirley Hill of Cross City; 6 grandchildren and 6 great grandchildren. She was preceded in death by her parents; brother Eugene Hill, sister Elaine Hill and grandson Landon Roberts. Funeral services for Mrs. Roberts will be held on Monday, April 3, 2017 at 1:00pm at the Rick Gooding Funeral Home Chapel in Cross City with Rev. Andrew Knight officiating. Interment will follow at Cross City Cemetery. A visitation will be held at the funeral home an hour prior to the service. Arrangements have been placed under the care of Rick Gooding Funeral Home, Cross City, Florida, 352-498-5400 and Chiefland, Florida, 352-493-0050. Please sign the online guest book at rickgoodingfuneralhomes.com

The family of Sarah V. Roberts created this Life Tributes page to make it easy to share your memories.

Send flowers to the Roberts family.