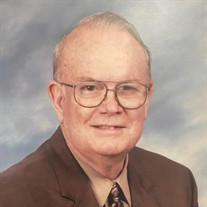 Richard Patrick “Pat” Gooding, age 84, passed away to his heavenly reward on December 20, 2021. Born in Winter Garden, FL on May 10, 1937 to Richard E. and Nancy Waldrop Gooding, Mr. Pat, as he was affectionally known, served the citizens of Dixie County through his ministry at the Richard P. Gooding Funeral Home for 50 years as a 3rd generation funeral director, where he also ran the county ambulance service for many years. He was also the owner, operator of Gooding’s Medicar, a non-emergency medical transportation company and Wellness Medical Equipment, a supplier of durable medical equipment. After retiring from the funeral home, he started and operated Pat Gooding Vending, which served the north central Florida area with snacks and drinks and other vending products. Mr. Pat was formerly a 3rd generation member and past president of the Dixie County Rotary Club. He was a member of the First Baptist Church of Cross City where he was a Deacon and at one time a Sunday school teacher. Mr. Pat, in his earlier years, was a private pilot and enjoyed flying every chance he got. He also enjoyed traveling, quail hunting and frog gigging. He is survived by his wife of 64 years, Nancy Carol Gooding, son, Richard C. “Rick” Gooding (Janet) of Cross City; daughters, Donna Lynn Feaster (Ted) of Ocala, and Karen Leigh Herring (Danny) of Old Town; brother Michael Gooding of Richmond, VA; 10 grandchildren, 16 great-grandchildren and 4 great great-grandchildren. Funeral services will be held at the Rick Gooding Funeral Home in Cross City Monday, December 27, 2021 at 2:00pm with a visitation an hour prior. Pastor Mike Brown and Pastor Joe Brooks will officiate. Interment will follow at Cross City Cemetery. Arrangements have been placed under the care of the Rick Gooding Funeral Home Cross City Chapel, with locations in Cross City 352-498-5400 and Chiefland 352-493-0050. Please sign the online guest book at rickgoodingfuneralhomes.com

The family of Pat Gooding created this Life Tributes page to make it easy to share your memories.

Richard Patrick “Pat” Gooding, age 84, passed away to his heavenly...

Send flowers to the Gooding family.