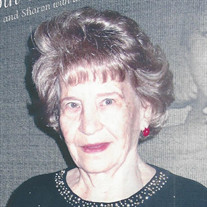 Pansy Marie Swilley Robinson of Bronson, Florida, passed away at Tri-County Nursing Home and Rehabilitation Center in Trenton, on Friday, April 12, 2019, at the age of 90. Pansy was born in the Judson area of rural Trenton, Gilchrist Florida on December 14, 1928, the daughter of Call Rowe Swilley and Callie Mable Fralick. Pansy was married to the late Winfred Lemuel (Lem) Robinson on July 2, 1944 in Cross City, Florida. The couple made their home in Trenton, Florida in their early marriage, where they lived when their three children were born. Then they moved about, living in several other places before finally settling in Bronson, Florida in 1959. She was a devoted member of the Church of Jesus Christ of Latter-day Saints, where she served our Lord and Savior in many different capacities. She was retired from Bear Archery of Gainesville, and enjoyed an active life of reading, watching Florida Gator games, square dancing, sewing, crocheting, gospel sings, and travel. What she enjoyed most however, was visiting and spending time with her beloved family. She was preceded in death by her husband, parents, a sister, Mary Clyatt, and four brothers, Franklin, Elmer, Noel and Angus Swilley. She is survived by her son, Aaron Robinson of Bronson, and two daughters, Linda Baynard of Chiefland, and Sharon West of Tallahassee; ten grandchildren, Lem (Julie) Robinson, Emily (Dallas) Locke and Jesse (Caitlin) Robinson all of Bronson, Gregory (Cheryl) Moody of South Bend, Indiana, Alicia (Jim) Jenkins of High Springs, Adrienne (Allen) Beasley of Tallahassee, Micah (Annie) West of Cheyenne, Wyoming, Trava (Sean) Ridlon of Melrose, Serena (Chad) Myers of Memphis, Tennessee, and Joseph (April) West of St. Johns; twenty-five great grandchildren, and one sister, Dessie Mae Crews of Virginia. Funeral Services are planned for Friday, April 19, 2019 at the Church of Jesus Christ of Latter-day Saints, 215 NE 8th Street, Chiefland, FL, 32626 at 11:00am. Interment will follow at Barber Robinson Cemetery, Hwy 351 N., Cross City, FL. A visitation will be held on Thursday, April 18, 2019 at Rick Gooding Funeral Home in Chiefland between the hours of 6-8 pm. Arrangements has been placed under the care of Rick Gooding Funeral Chiefland, Florida 352-493-0050 and Cross City, Florida 352-498-5400. Please sign our online guest book at: rickgoodingfuneralhomes.com

Pansy Marie Swilley Robinson of Bronson, Florida, passed away at Tri-County Nursing Home and Rehabilitation Center in Trenton, on Friday, April 12, 2019, at the age of 90. Pansy was born in the Judson area of rural Trenton, Gilchrist Florida... View Obituary & Service Information

The family of Pansy M. Swilley created this Life Tributes page to make it easy to share your memories.

Send flowers to the Swilley family.