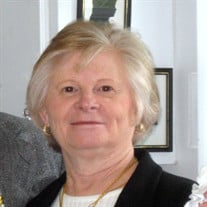 OPAL “LAVERNE” JONES DERFINYAK, 73, of Gainesville, Florida passed away July 30, 2017 in Kansas City, Missouri. Mrs. Derfinyak was born February 29, 1944 to the late Bertie and Hilton Jones, Sr., but had resided in Gainesville for several years. She had worked for several years as a teacher’s aide and teacher at several schools in Miami and Gainesville. She then attended Santa Fe College and became a Licensed Practical Nurse, after which she worked at North Florida Medical Center for over 15 years before retiring in 2004. Mrs. Derfinyak was a member of the First Baptist Church Gainesville and was active with the ladies group there. In her spare time, she enjoyed ballroom dancing, traveling, cooking, and being around people. She is survived by a son Eugene Derfinyak, III., a daughter April Gerry (John), a brother H.F. Jones, Jr. (Wanda), two grandchildren, and other extended family members. Funeral services for Mrs. Derfinyak will be held 10:00 AM Friday, August 4, 2017 in the Rick Gooding Funeral Home Cross City Chapel. Interment will follow at Rock Sink Baptist Church Cemetery. The family will receive friends at the funeral home one hour prior to the service. In lieu of flowers the family requests memorial donations be made to Rock Sink Baptist Church. Arrangements have been placed under the care of Rick Gooding Funeral Home, Cross City, Florida, 352-498-5400 and Chiefland, Florida, 352-493-0050. Please sign the online guest book at rickgoodingfuneralhomes.com

The family of Opal "Laverne" Derfinyak created this Life Tributes page to make it easy to share your memories.

Send flowers to the Derfinyak family.