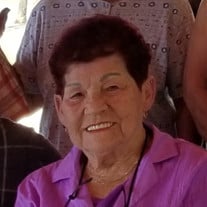 Mildred Icosaler Webb Brown, 81, of Cross City passed away January 18, 2020. Mrs. Brown was born May 28, 1938 in Jacksonville, Florida. She married Robert Lee Brown from Cross City, FL May 31, 1956. She graduated High School and then Alamogardo Normal Institute where she earned her teaching certificate. She earned her bachelor’s degree in education from the University of New Mexico. She taught in Las Vegas, NV before retiring in 2004. After retirement she moved to Cross City, where she enjoyed reading all the books, she never had time for, spending time with her family, gardening, and volunteering. She had been a member of the Dixie County Rotary Club, the Chamber of Commerce, the Dixie Divas Red Hat Ladies, the Solo Flight Bible Study at the First Baptist Church, the Cross City Lions Club, a member of the N.C.O. Club with the United States Airforce, and was the Commander of the D.A.V.A. Chapter 63 of the Tri County in 2011. Mrs. Brown is survived by her daughters Pamela Kay Smith of Cross City and Judy Darlene Hanson of Las Vegas, NV, her grandson Robert Corey Smith of Las Vegas, NV, and other extended family members. Arrangements have been placed under the care of Rick Gooding Funeral Home Cross City, Florida 352-498-5400 and Chiefland, Florida 352-493-0050. Please sign the online guest book at rickgoodingfuneralhomes.com

The family of Mildred Brown created this Life Tributes page to make it easy to share your memories.

Send flowers to the Brown family.