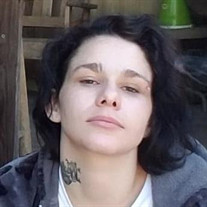 Michalia Dawn Conover (Gibson), 21, of Bronson passed away July 7, 2018 Michalia was born on December 23, 1996 in Gainesville FL but lived and grew up in the Archer/Bronson area. During her adolescent years, she was raised as an active member of Bronson Road Church. Although she had lost her way, she will always be remembered as a free spirit who had the most amazing soul. She had a love for animals and nature that can’t be explained nor contained. She is a loved and cherished daughter, sister, aunt, granddaughter, niece, and friend. Michalia is survived by her parents Steve and Tonya Conover, of Archer FL, her sisters Stephanie Conover and Tiffany Conover, of Bronson FL, her brother Zachary Conover, of Archer FL and a ha lf-brother Scott Gilbert, of Goshen OH. She is also survived by her grandparents Sandy (Dan) Paytes, of Hamilton OH, and Lewis (Phyllis) Conover, of Bronson FL. Her aunts and uncles include Connie (Joe) Merrill, of Hamilton OH, Kristen (Buddy) Fields, of Hamilton OH, Dana (Adam) Simpson, of Hamilton OH, Larry Kestler, of Hamilton OH, Dan Paytes Jr., of Hamilton OH, Deborah (Paul) Hauser, of Bronson FL, Eddie (Gloria) Conover, of Fayetteville AR, Barry (Cindy) Conover, of Ft. McCoy, FL, Larry Conover, of Cincinnati OH, and James (Theresa) Carroll, of Taylorsville KY. She also has a large extended family. She was preceded in death by her grandmother, Harriet S. Sebree and her grandfather, James R. Carroll. Services for Michalia will be held at Bronson Road Church on Friday, July 13th 2018 at 6pm. The family will receive friends at the church starting at 5pm. Bro. Robin Thomas and Pastor Andy Cook will be officiating. Potluck dinner will be held in the fellowship hall following. Arrangements have been placed under the care of Rick Gooding Funeral Homes, Chiefland, Florida, 325-493-0050 and Cross City, 352-498-5400. Please sign the online guest book at rickgoodingfuneralhomes.com

Michalia Dawn Conover (Gibson), 21, of Bronson passed away July 7, 2018 Michalia was born on December 23, 1996 in Gainesville FL but lived and grew up in the Archer/Bronson area. During her adolescent years, she was raised as an active member... View Obituary & Service Information

The family of Michalia Conover created this Life Tributes page to make it easy to share your memories.

Send flowers to the Conover family.