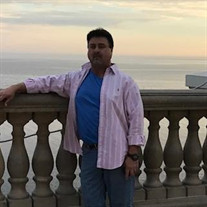 Kevin Michael McKenzie, 52, of High Springs, Florida passed away March 1, 2021. Mr. McKenzie was born November 4, 1968 in Ft. Walton Beach, Florida, but had lived in the High Springs area since 1979 after moving here from Panama City, Florida. He was the Senior Manager of Operational Excellence at Ology Bio-Services in Alachua, Florida and was a member of the High Springs Church of God. In his spare time, Mr. McKenzie enjoyed spending time with his children and grandchildren, hunting, and fishing. Mr. McKenzie is survived by his wife Darlene McKenzie, his sons Christopher Butler (Amanda), Kevin McKenzie (Chelsea), and Chase McKenzie (Allie) all of High Springs, his daughter Tina Lewis (Adam) of High Springs, his grandchildren Lelia, A.J., Sammie, Bryce, Dawson, Brigett, and Gracie, his mother Patricia McKenzie of High Springs, his brothers Joseph McKenzie, Jr., Timothy McKenzie (Roxanne), and Rick McKenzie (Angie) all of High Springs, his sisters Michelle Arnold (J.R.) and Kirsten Burnett (Garrett) both of High Springs, and other extended family members. He was proceeded in death by his father Joseph C. McKenzie Sr. A memorial service will be held for Mr. McKenzie 11:00 AM Friday, March 5, 2021 at the High Springs Church of God, with Pastor Terry Hull officiating. The family will receive friends at the Church one hour prior to the service. Arrangements have been placed under the care of the Rick Gooding Funeral Home Chiefland Chapel, with locations in Cross City 352-498-5400 and Chiefland 352-493-0050. Please sign the online guest book at rickgoodingfuneralhomes.com

The family of Kevin M. McKenzie created this Life Tributes page to make it easy to share your memories.

Send flowers to the McKenzie family.