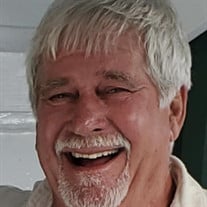 John Robert Whaley, USN (Ret.), 68, beloved step father and friend to many, passed away peacefully on Monday, October 18, 2021 at his home in Old Town, FL due to natural causes. John was born on June 4, 1953 in Huntsville, AL, son of James R. Whaley and Hazel Whaley. After serving in Vietnam, John found his home on St. George Island off the Florida Panhandle in the late 1970s. John harvested and served oysters in his own famous oyster bar named The Whale’s Tail. John went on to become a dive instructor in Apalachicola. He married and raised two stepsons as his own, who he passed on his passion for fishing and diving which forever shaped their lives. John made many lifelong friends there, who he spoke with weekly for the remainder of his life. In the mid 1990s, John earned his Captains license and began chartering yachts in the Bahamas and later in south Florida, a career that he would enjoy for the next 20 years. John enjoyed telling tales of his high seas adventures catching marlin and island hopping with the locals. He worked out of Deep Water Marina and lived on the Apogee sailing vessel. By mid-2010s, John returned to the panhandle to work as Chief Engineer for a government contractor out of Tyndall Air Force base. Shortly after John purchased his dream home in 2017 in Mexico Beach, only to be leveled by Hurricane Michael along with the Air Station. From there, John lived his next adventure in Key West where he served as Chief Engineer on a 192ft vessel until his retirement in 2020. John found his final home in Old Town, FL, along the Suwannee river, where he had plans to charter a boat of his own. John will forever be remembered by his engaging personality and the impact he had on everyone in his life. The passion he brought to every relationship in his life will never be forgotten. He is survived by his stepsons Ryan Soberay and Adam Soberay. He is preceded in death by his parents, brother Dana L. Whaley and sisters Karen Herring and Lisa Whaley Celebration of Life event details to follow.. Arrangements have been placed under the care of the Rick Gooding Funeral Home Cross City Chapel, with locations in Cross City 352-498-5400 and Chiefland 352-493-0050. Please sign the online guest book at rickgoodingfuneralhomes.com

John Robert Whaley, USN (Ret.), 68, beloved step father and friend to many, passed away peacefully on Monday, October 18, 2021 at his home in Old Town, FL due to natural causes. John was born on June 4, 1953 in Huntsville, AL, son of James... View Obituary & Service Information

The family of John R. Whaley created this Life Tributes page to make it easy to share your memories.

Send flowers to the Whaley family.