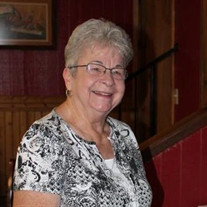 Joe Ann Sheppard, 74, of Cross City passed away March 16, 2019. Mrs. Sheppard was born November 30, 1944 to the late Otis and Bernice Evans in Melvin, Alabama. She had lived in the Cross City area for most of her life after moving here from... View Obituary & Service Information

The family of Joe Ann Sheppard created this Life Tributes page to make it easy to share your memories.

Send flowers to the Sheppard family.