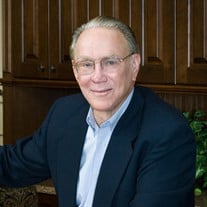 Joe H. Anderson, Jr., lifelong resident of Old Town, FL and founder of Anderson Columbia Co., Inc. passed away Tuesday, November 29, 2016 with his family by his side. He was 77 years old. Joe was preceded in death by his father Joe Henry and mother Mary. He is survived his wife Cindy, children; Joe III (Sonya), Douglas (Lisa) and Cindy Childers. Grandchildren; Joey Anderson IV, Tara Beauchamp (Jake), Amy Anderson, Tymber Anderson, Megan Land (AJ), Hunter Anderson, Gray and Will Childers, and three Great-Grandchildren; Holden Beauchamp, Jaci Beauchamp, Lawsyn Land and two sisters; Harriet Wall (Rolfe) all from Old Town and Ella Mae Pappas ( Fred ) from Jacksonville, Fl. He was a member and in regular attendance at Sunday School and worship services at First Baptist Church in Cross City. He also enjoyed services and visiting with friends at the Church of God in Cross City. Joe or “Mr. Joe” as he was affectionately known by all, began working in construction at a very early age and just after his eighteenth birthday, formed what became known as Anderson Contracting Co., and followed later with the addition of Columbia Paving and a name change to Anderson Columbia, Co., with its corporate headquarters in Lake City. Today, AC is recognized as a major highway infrastructure construction company in the southern United States. Joe was actively involved in every phase of construction, running equipment, driving everywhere for parts, making repairs, looking at, estimating and bidding on jobs. He was a determined man with a competitive spirit willing to stay the course to see that construction jobs were completed. In the early days of work, he was assisted by his sister Harriet Wall and longtime friend and employee Ernest Sheppard. The company grew and expanded operations. Joe never retired from work, but turned over the day to day operations of Anderson Columbia Co. to his two sons and daughter who have continued to build on the successes of their father, expanding operations in a number of states. His passion was to work and he continued to be an integral part of AC’s operations and was a driving force behind the founding of Suwannee American Cement in Branford, Fl, providing additional jobs for area residents. In 2012, Joe was elected by his peers to the Florida Transportation Builders (FTBA) Hall of Fame for his tireless efforts as an advocate for the transportation industry, working with friends, business associates and governmental officials to insure quality infrastructure and highways. In the mid-2000’s Joe began to refocus his efforts and developed a real passion for helping with the basic needs of people and their spiritual growth. There were many who were down and out, widows and those needing a hand up that were recipients of Joe and the family’s charitable giving. Joe also began discussing ways to share Christ’s love for people and their salvation. Wanting to reach as many as possible, he began thinking about getting a tent and taking it from city to city to share God’s word. Many said the days of the tent being an effective tool for winning souls was over. After prayerful consideration, he furnished the funds for a tent, chairs, sound system, stage, lights and tractor trailer and within a few months, the first tent revival was held in Old Town, in a field off Chavous Rd. That was 2009 and this year, the tent is still going strong with the latest Crusades for Christ Tent Ministry revival be held in Belle Glade, Florida with over 3,000 accepting Christ as their Lord and Savior. Many thousands have been saved under that same tent since it began in 2009 and now, seven years later, it is scheduled for many other cities. Joe also had a passion for America and the principles on which it was founded. His thinking led to a desire to install solid granite Ten Commandments monuments throughout the land. Many said it couldn’t be done, the ACLU would sue. Determined, Joe, with the approval of the County Commission, installed a six ton monument on the courthouse steps in Dixie County. The ACLU sued. The people in Dixie County stood firm in their convictions. A trial was held and an appeal was heard in Atlanta. Liberty Counsel helped in the defense. Thousands of County residents and many from around Florida came out in support of the monument one bright Sunday afternoon and today it still stands on the courthouse steps. In their latest venture, Joe along with children invested in the old KOA campground along the Suwannee River, developing a Christian Campground called Camp Anderson. The campground offers wholesome Christian activities for youth, churches and special groups of all ages. Many churches have sent young people to the camp and many thousands have found Jesus. Many other children who for various reasons don’t have parents and are being cared for by the State of Florida have been participants in the camp and have accepted Jesus as their Lord and Savior. Recently, Camp Anderson was recognized by Governor Scott and given the “Champions of Hope” award from the State of Florida at the National Faith Symposium for their work with “at risk” children. The family invites friends to join them at Rick Gooding Funeral Home in Cross City on Thursday, December 1, 2016, from 6 pm to 8 pm to share remembrances of Joe. Services will be held at the First Baptist Church of Cross City on Friday, December 2, 2016 at 11:00 am, with Pastor Mike Brown officiating. Interment will be at Old Town cemetery. In lieu of flowers the family requests that donations be made to Camp Anderson, Inc., PO Box 38, Old Town, FL 32680. Arrangements have been placed under the care of Rick Gooding Funeral Homes, Cross City, Florida 352-498-5400 and Chiefland, Florida 352-493-0050. Please sign the online guest book at rickgoodingfuneralhomes.com

Joe H. Anderson, Jr., lifelong resident of Old Town, FL and founder of Anderson Columbia Co., Inc. passed away Tuesday, November 29, 2016 with his family by his side. He was 77 years old. Joe was preceded in death by his father Joe Henry... View Obituary & Service Information

The family of Joe H. Anderson Jr. created this Life Tributes page to make it easy to share your memories.

Send flowers to the Anderson family.