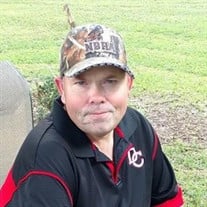 Jason Thomas Herring, Dixie's Very Own Mr. Two Bits, was born October 30, 1970 to Mickey and Jennie Herring and joined Jesus on December 1, 2019. Jason is survived by his mother, Jennie Herring, brother Hubel Herring (Tina), sisters BoKaye Wright (Nathan) and Haley Herring, his 4 nieces, Kylah, Nathalie, Anniston, and Bexleigh Jase, and his two nephews, who he referred to as "them boys", Jaxson and Graycen, and a host of aunts, uncles, and cousins. He is preceeded in death by his father, Mickey Herring, his grandparents Harold and Edith Herring and Thomas and Floretta Lamb, Uncle Ronnie Herring, and many others. On December 1st, 2019 Jason's greatest wish came true. He met his dear friend Jesus and was reunited with all friends and family that went before him. Jason was healed in his body, mind, and soul, in his words, Jason was made "normal." Jason was not normal...He was extraordinary . Jason touched the life of anyone who met him or talked with him. My brother was a simple man, he wanted to watch football, either his Gators or his Bears, he wanted to go to church on time, which meant 10 minutes early for everyone else, to ride his four wheeler, and eat all the food, except oranges of course because he hated oranges. Jason wanted to win people over to Jesus, to preach. Many days in my childhood I would hear the familiar sound of Jason preaching to his imaginary congregation. Countless times I heard him pray for anyone or anything he thought needed it. Jason wasn't like everyone else. He was special, a genuine loving innocent soul who never did anyone wrong or had a bad thought about anyone. He never met a stranger, and considered many family. My brother... was extraordinary. The hole he leaves in our hearts, our family, and our community is extraordinary. Thousands of tears have been shed over him while his mind and spirit, left him, but none of the pain we endured over the last two years compares to the peace we now have in knowing his suffering is over. This separation is just "tempatary" though, we will see you again. Don't think this is the end for Jason, oh no, rejoice, for he has been made whole. Funeral services for Jason will be held 3:00 PM Wednesday, December 4, 2019 at the First Baptist Church of Cross City, with Pastor Mike Brown officiating. Interment will follow at the Cross City Cemetery. The Family will receive friends at the funeral home Tuesday evening from 6 – 8 PM. Arrangements have been placed under the care of Rick Gooding Funeral Home Cross City, Florida 352-498-5400 and Chiefland, Florida 352-493-0050. Please sign the online guest book at rickgoodingfuneralhomes.com

The family of Jason T. Herring created this Life Tributes page to make it easy to share your memories.

Send flowers to the Herring family.