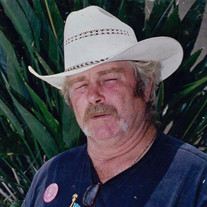 James “Trapper” Monroe Watson, 70, of Horseshoe Beach, Florida passed away September 22, 2021. Mr. Watson was born August 29, 1951 to the late John and Emily Watson in Stuart, Florida, but had spent most of his life in the Dixie County area. He was a member of the Horseshoe Beach First Baptist Church, the Rock Level Hunting Club, the Florida Trappers Association, and the Second Amendment Supporters Group. Mr. Watson loved the outdoors, would always try to help others, he was an old school cowboy, liked to reload ammo, liked to go shooting, and was a jack of all trades. Mr. Watson is survived by his wife who he was with for over 30 years Lorene Watson, his daughters Tracy Harding, Lawanda Castro, Jennifer Thomas, Lori Watkins, and Laura Watson, his brothers David Watson, Skitter Watson, Tom Watson, and Raymond King, Jr, his sisters Fannie Watson, Carla Lambert, Lisa Martin, and Jackie Giaimo, 14 grandchildren, 4 great-grandchildren, and other extended family members. He was preceded in death by his sons James Monroe Watson Jr, Jesse Malcom Watson, and Larry Harding. Funeral services for Mr. Watson will be held 4:00 PM Tuesday, September 28, 2021 at the Rick Gooding Funeral Home Cross City Chapel, with Bro. John Sherrill and Bro. Tim Bear officiating. The family will receive friends at the funeral home one hour prior to the service. Arrangements have been placed under the care of the Rick Gooding Funeral Home Cross City Chapel, with locations in Cross City 352-498-5400 and Chiefland 352-493-0050. Please sign the online guest book at rickgoodingfuneralhomes.com

The family of James "Trapper" Watson created this Life Tributes page to make it easy to share your memories.

Send flowers to the Watson family.