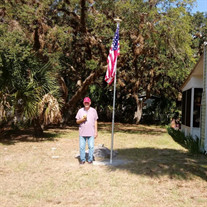 James “Jim” Hubert Lilley, 75, of Horseshoe Beach, Florida passed away December 27, 2021. Mr. Lilley was born December 19, 1946 to the late Hubert Lilley and Mary Catherine Duquette Ryan, in Wilkinsburg, Pennsylvania. He had lived in Horseshoe Beach for three years after moving here from Slippery Rock, Pennsylvania. He also lived in Youngstown, Ohio for 30 years. He was a Veteran of the United States Navy, and attended several of the reunions they had for the Polaris submarine he served on, the U.S.S. James Monroe. Mr. Lilley retired after many years in supervisory positions with Volkswagen, New Stanton, PA, Galaxy Cheese, New Castle, PA, and Tuboscope Vetco at North Star Steel Company, Youngstown, OH. Mr. Lilley was an avid football fan, especially for the Steelers, and was a member of the Horseshoe Beach First Baptist Church. Mr. Lilley is survived by his wife of 53 years Eileen Lilley, his daughters Renee Lilley, Terry Lilley, and Traci Lilley, his brother Bill Ryan, his sisters Kathy Maurer and Patty Ryan, eight grandchildren, and other extended family members. A memorial service will be held for Mr. Lilley 10:30 AM, Saturday, January 15, 2022 at the Horseshoe Beach First Baptist Church, with Pastor Tim Baer officiating. In lieu of flowers, donations may be made to the Alzheimer’s Association or to a favorite charity of your choice. Arrangements have been placed under the care of the Rick Gooding Funeral Home Cross City Chapel, with locations in Cross City 352-498-5400 and Chiefland 352-493-0050. Please sign the online guest book at rickgoodingfuneralhomes.com

The family of James Hubert Lilley created this Life Tributes page to make it easy to share your memories.

Send flowers to the Lilley family.