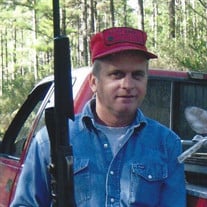 James Anthony “Ankie” Cannon, age 61, went to be with his Heavenly Father on Saturday, January 12, 2019. He was surrounded by the presence of God and both his earthly and heavenly family. Ankie was born on October 29, 1957 to J. D. and Virginia Cannon. Ankie married the love of his life, Debbie O’steen Cannon on May 25, 1979. God blessed them with a beautiful daughter, Jessica; whom he adored. Ankie was a faithful servant in all areas of his life. Some of the things that Ankie was passionate about was his love of Jesus, his family, his friends, his sawmill, logging, hunting and running his dogs. Ankie has been a hard worker all of his life. Ankie started his logging career employed by Junior Roberts, working for several logging outfits, including Bill Rollison, Frank Robson, Ricky Robson and was currently with VanAernam Timber Management. In between hunting seasons, when he wasn’t working in the logging woods he could be found working at his own sawmill. Ankie was a devoted member of the Pentecostal Holiness Church where he confessed his faith in Jesus Christ at an early age. Ankie is awaiting in heaven to be joined by his wife of 39 years Debbie O’steen Cannon; his daughter Jessica (Dell) Mathis; his mother-in-law Gaye O’steen; his parents, J. D. and Virginia Cannon; brothers, David (Pam) Cannon and Timmy (Lynn) Cannon; sister Delene (Jody) Robson; uncle/brother Tommy (Diane) Hamilton and a host of nieces and nephews. Ankie joined the celebration in heaven with a host of family members, including his father-in-law Bobby W. O’steen. Funeral services will be held at 11:00 am at Rick Gooding Funeral Home Chapel in Cross City on Wednesday, January 16, 2019 with Rev. John Driggers and Rev. Raymond Wilcox officiating. Interment will follow at Cross City Cemetery. A visitation will be held at the funeral home Tuesday evening, January 15, 2019 between the hours of 5 and 7 pm. Arrangements have been placed under the care of Rick Gooding Funeral Home Cross City, Florida 352-498-5400 and Chiefland, Florida 352-493-0050. Please sign the online guest book at rickgoodingfuneralhomes.com

The family of James "Ankie" Anthony Cannon created this Life Tributes page to make it easy to share your memories.

James Anthony “Ankie” Cannon, age 61, went to be with his Heavenly...

Send flowers to the Cannon family.