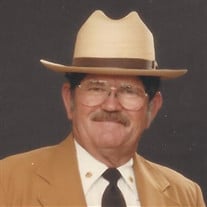 Mr. Herman Edward Gamble, 88, of Cross City, Florida, passed away peacefully at his home Thursday, September 14, 2017. He was born November 3, 1928 to Jessie Clyde “J.C.” and Sadie Ward Gamble. After the death of his father he left school to support his mother and siblings and at the age of 18, he was drafted into the Army where he served for 3 years, 18 months in the Korean War, achieving the rank of sergeant. For the next 3 years he drove a cattle truck and obtained his GED Certificate. In 1955, he joined the Florida Department of Corrections as a C01 and retired 32 years later in 1987 as a Colonel. As a correctional officer, he was known for being firm but fair. Mr. Gamble was a member of Central Baptist Church in Cross City. Mr. Gamble is survived by his wife of 31 years, Pat Gamble; sons, Jeff (Rose) Gamble of Tampa, FL, Eddy (Donna) Sheppard and Greg (Lisa) Sheppard of Cross City, FL; daughters, Melessa (Ray) Page of O’Brien, FL and Lori (Kevin) Summers of Trenton, FL; 11 grandchildren and 13 great grandchildren. He is preceded in death by his parents, J. C. and Sadie Gamble, daughter, Denise Gamble and brother, Billy Gamble. Funeral services will be held Sunday, September 17, 2017 at 3:00pm at the Rick Gooding Funeral Home Cross City Chapel with Pastor David Downing officiating. A visitation will be held an hour prior to the service. A private family burial will be held at a later date at the Sapp Cemetery in Raiford, FL. In Lieu of flowers, donation may be made to the Awana Program at Central Baptist Church, P.O. Box 1780, Cross City, FL. 32628. Arrangements have been placed under the care of Rick Gooding Funeral Home, Cross City, FL, 352-498-5400 and Chiefland, 352-493-0050.

The family of Herman Edward Gamble created this Life Tributes page to make it easy to share your memories.

Send flowers to the Gamble family.