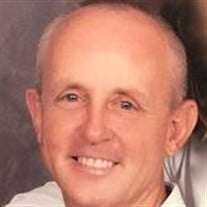 HERBERT HARPER RAKER, JR. “HERBIE”, of Cross City, Florida, passed away at the age of 58 at North Florida Regional Hospital Friday, August 4, 2017. Herbie was a member of Lydia Baptist Church where he served as Deacon, Sunday School Teacher and Recreations Director for Awanas. He loved Jesus and was a faithful servant, never missing a day spending time in God’s Word. Herbie graduated from Dixie County High School in 1976. He was very active in sports, playing football and basketball, and was president of his senior class. After graduating, he attended the University of Florida. He became the owner and operator of Raker Land Surveying in 2000, taking over the family business for his father who started the business in 1979. Herbie was known for always treating everyone with honesty and integrity. He enjoyed hunting, spearfishing, boating, Dixie County Bear and Florida Gator football and playing basketball but above all he loved his family and church family. He is survived by his wife of 30 years, Suzanne Miller Raker; son, Dillon Tyler Raker and daughter, Alexandria Breanne Raker; and sisters, Penny Robson, Dianne Koschatzky and Judy Hatcher. A Celebration of Life Service will be held at Lydia Baptist Church in Cross City on Sunday, August 6, 2017 at 3:00pm with Rev. Jarrett Thomas officiating. Arrangements have been placed under the care of Rick Gooding Funeral Home, Cross City, Florida, 352-498-5400 and Chiefland, Florida, 352-493-0050. Please sign the online guest book at rickgoodingfuneralhomes.com

The family of Herbert Harper Raker Jr. created this Life Tributes page to make it easy to share your memories.

Send flowers to the Raker family.