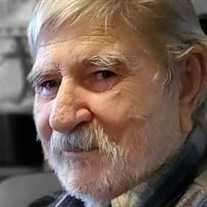 George Wallace Glover was born June 23, 1945 in Lochloosa, Florida to parents Massey Glover and Gladys Bryant Glover. One of eleven children, George was raised in Hawthorne, Florida, where his love of family, farming and fishing began. George spent his early adulthood working in the heating and air conditioning trade in Gainesville, Florida. Where he met his first wife Dianne Cheshire Akins and welcomed his daughter, Judy Glover Bloom. George relocated to Dixie County where he would spend the next 40 years with the love of his life, Sherry Weeks Glover. Together, they raised daughters Gina and Barbara, and welcomed seven grandchildren. George’s grandchildren meant the world to him and were the pride of his life. George loved nature, most enjoyed being outside and grew the most beautiful flowers. He loved to work with his hands and had a gift of making anything he touched more beautiful. He enjoyed a long career working as a commercial oyster fisherman in Horseshoe Beach, Florida and was happiest being out on the Gulf of Mexico, where the sky and sea meet. George is preceded in death by his parents Massey and Gladys; brothers Joseph, Charles and Jimmy Glover; and sisters Leola Glover, Bobbie Glover Harris, Shirley Glover Bass and Betty Glover Burback. He is survived by his brothers, Edward and Richard Glover, as well as his sister, Joyce Glover McDonald. He is remembered by his wife, Sherry Weeks Glover; daughters Judy Glover Bloom, Gina Glover Butler and Barbara Glover Cano; grandchildren Sherry Ann Glover, Justin Glover, Adrianna Glover, Lillian Bowe, Abel Bennett, Bianca Cano, Gerson Cano and Candace Cabral; and son in laws David Bloom and Roni Cano. George passed away in his home on June 2, 2022. He will be long remembered for his love of family and nature. Family and friends can take comfort knowing that George will be in Heaven, waiting to see them again someday. A celebration of life for George has been planned for his family.

The family of George Wallace Glover created this Life Tributes page to make it easy to share your memories.

Send flowers to the Glover family.