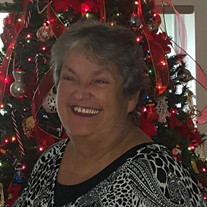 Theresa “Gail” Salas 65, of Old Town FL. Passed away at home Dec 7, 2021. Ms. Gail as she was known in this community was born October 14, 1956, in Leesburg Fl. She resided in Ocoee Fl. She was the daughter of Thelma and Bobby Bretzlaff, they were cross country truck drivers. So Gail got to see the United States thru the windshield of an 18 wheeler. She went to Ocoee High School where she was a cheer leader and very active in Chorus and many other clubs. She started her 1st career as a waitress at the age of 13. She rapidly became very successful as a waitress as she had that amazing personality and smile that would light up any room. She met and married her 1st husband and they had their daughter Autumn. Then 18 months later she had their Son John. They resided in the Ocoee/Winter Garden area till 1993. They relocated to Dixie County, She worked at The Sportsman’s Club, Then Suwannee Gables Restaurant. Then in 1997 she opened her own restaurant “Gail’s Café” in Old Town at the Hitchcock’s Plaza off Hwy 19 and 349. even though she was told she wouldn’t be able to make a go of it. She proved them wrong. She used her Café to aid the residents of Dixie County by hosting many community events. Every year the Café was open, the Sunday after Thanksgiving. She would be open and donate all the proceeds of the day including the cost of the food to the local Toys for Tots program serving Dixie County. The Café with the help of many locals held a community Easter Egg Hunt. It served hundreds every year for 10 years. She held multiple Community Christmas sings and cookie exchanges, Spring Dances, and Fall Festivals. The Café served the community for 20 years under her direction. In 2008 She met and married “Mr. Bob” Salas, and she was able to fulfill one of her greatest dreams of teaching children. In 2009 she started her 2nd career and got her Certificate and started as a Pre K Aid at Old Town Elementary School. Where she taught for 10 years. Her greatest LOVE being a Teacher. For she always believed that teaching children was the greatest calling from our Heavenly Father. In her class room, her home, her mind, she had a saying that went. “One hundred years from now, It will not matter the kind of car I drove, the sort of house I lived in, or how much money I had in the bank, but what will matter is I made the difference in the life of a Child.” Ms. Gail is survived by her husband Bob Salas of 15 years, Children, Autumn Carlisle, John (Sarah) Rigby, Rob (Asulu) Salas, Tony (Kendra) Joseph, Stewart (Mindy) Joseph. Brothers and Sisters, Darrell (Sue) Cockcroft, Jean (David) Tittsworth, Ann (Ray) Graber, Ann Keen, Judy (Mickey) Williams, Wilson Randolph Jr, Gene (Rhonda) Randolph, Vi (Ralph) Wessel. 10 Grandchildren, 1 Great Grandchild. And many extended family members. Her celebration of life service will take place at the Rick Gooding Funeral Home Cross City Chapel 2:00 PM Saturday, December 18, 2021. In lieu of flowers the family is asking that you make a donation to Haven Hospice at 4200 NW 90th Boulevard, Gainesville, FL, 32606-3809 Ph. (800) 727-1889 Arrangements have been placed under the care of the Rick Gooding Funeral Home Cross City Chapel, with locations in Cross City 352-498-5400 and Chiefland 352-493-0050. Please sign the online guest book at rickgoodingfuneralhomes.com

The family of Gail Salas created this Life Tributes page to make it easy to share your memories.

Send flowers to the Salas family.