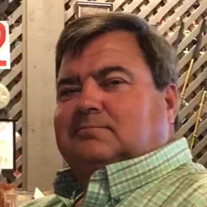 Frank Bussard Jr., 54, was born on January 8, 1968, in Hialeah, FL, and passed away May 4th, 2022, with his family at his side at ET York Hospice, Gainesville, Fl. He fought so hard to overcome the aftermath of Covid-19 for 281 days, home only 9 days of those days. He never gave up; his body just gave out. Frank knew at an early age he wanted to build his home and own property so at the age of 14 he took a deposit to James Hurst for a lot in Oak Ridge Subdivision. With his dad and friend’s help, he built our house that we raised our family in and called home for almost 35 years. Frank could build anything and worked on and off as a carpenter. In 1985, he went to work with PK Hunt House Movers. He enjoyed every job and welcomed any new challenges on each one. Over the years, he has moved and leveled many structures on his own. In 2001, he bought his first semi and a flatbed; he never looked back. He hauled lumber out of the local mills and later started hauling some agriculture products, peanuts mainly. He made many friends in several states doing what he loved. The truck drivers that “ran” with him became family and they looked out for each other and made sure they all made it home at the end of the day. As our kids got older, Frank found time to be involved in Rock Level Hunting Club as a director in 2010, Suwannee River Fair in 2013, and Dixie FFA Alumni in 2017. He was very active in all three and spent countless hours contributing to each. He helped organize and run equipment for the road work for the hunting club and fundraise for the Suwannee River Fair and FFA. He built tables to raffle off and loved organizing the annual rib cook off for the alumni. He enjoyed the hunting club but had a real heart for the Suwannee River Fair and FFA. He served as the swine division superintendent and Vice President for the Suwannee River Fair and the President of the Dixie FFA Alumni. One chapter of his legacy he was so proud of is the hundreds of youth he helped through these organizations. He said being on the boards was such a responsibility because you impact so many young lives and the direction they may take. He never took it for granted or lightly. Frank was known for his immense love for his family and spent as much time with family and friends, usually involving a meal, as he could. He enjoyed hunting, fishing, being at his camp he built, and being at the sandbar at Pepperfish on his airboat. He was happiest at Horseshoe at the camp or at friend’s places enjoying music, good food, and great company. Frank’s work ethic was unmatched. He never backed down from a challenge. He played as hard as he worked. Frank leaves behind his best friend and wife, Becky, of 34 years; his pride and joys-son, Dylan (Morgan), and daughter, Kyndal. Parents-Frank and Sally Bussard; sister, Sally Smith (Chris), and brother, Caleb Bussard (Ritchie); friends that we count as family, extended family, cousins, nephews, aunts, uncles, nieces, and countless precious friends. There will be a celebration of Frank’s life on May 14, 2022 at the Suwannee River Fairground Pavilion, 17851 NW 90th Ave, Fanning Springs, FL. 32693. The visitation will be at 12:00 pm with the service beginning at 1:00 pm. Frank will be laid to rest at Bowlegs Cemetery, 6094 SW 623rd St., Rocky Creek, FL. Following the graveside service, we will gather at the Steinhatchee Community Center for fellowship and a meal. The address is 1013 S. Riverside Dr., Steinhatchee, FL. 32359. We would like to request that in lieu of flowers, donations be made to Dixie FFA Alumni, PO Box 1732, Cross City, FL. 32628. Arrangements have been placed under the care of the Rick Gooding Funeral Home Cross City Chapel, with locations in Cross City 352-498-5400 and Chiefland 352-493-0050. Please sign the online guest book at rickgoodingfuneralhomes.com

The family of Frank Bussard Jr. created this Life Tributes page to make it easy to share your memories.

Send flowers to the Bussard family.