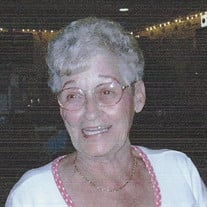 Earthal Evelyn Williams, 85, of Trenton Fl. passed away on Jan 4, 2020. Born in Cumberland County, Ky., her parents moved the family to New Castle, Indiana, where she grew up with 13 other brothers and sisters, fell in love and married her first husband and father of her two sons, Wallace Maynard and Esau Maynard, Jr. Evelyn, as she was lovingly called by family and friends, worked most of her life in Food Service management. She married twice more with her third husband being a Korean War veteran. She then became a lifetime member of the American Legion and Veterans of Foreign Wars. She most recently was an active member of Sebring VFW Post 4300, in the Women's Auxiliary (now known as the Auxiliary) for over 20 years. She was well loved and respected for her work ethic, as well as for her reliability and willingness to "be there in a pinch". Evelyn is preceded in death by her husband Milton Williams and brothers James and Estill Criswell. She is survived by her sons Wallace Maynard (Donna) and Esau Maynard, Jr. both of Trenton, her brothers Fred Criswell (Shirley), Rex Criswell (Darlene), Tim Criswell (Donna), Gene Criswell (Joyce), and Joe Criswell (Pat), her sisters Louise Crabtree, Barbara Mullins (Ed), Lorene Hurt, Kay Watson (Steve), Rose Fisher (Bill), and Darlene Runyn, seven grandchildren, eight great-grandchildren, and other extended family members. Funeral services for Evelyn will be held 2:00 PM Saturday, January 11, 2020 at the Rick Gooding Funeral Home Chiefland Chapel. The family will receive friends at the funeral home one hour prior to the service. Family and friends are invited to gather at Evelyn's home after the funeral. Evelyn will be interred with her husband, Bill, at Florida National Cemetery near Bushnell, Florida on the following Monday. There will be no graveside services performed at that time. The family requests donations may be made to St. Jude's Children's Hospital in lieu of flowers. Arrangements have been placed under the care of Rick Gooding Funeral Home Chiefland, Florida 352-493-0050 and Cross City, Florida 352-498-5400. Please sign the online guest book at rickgoodingfuneralhomes.com

Earthal Evelyn Williams, 85, of Trenton Fl. passed away on Jan 4, 2020. Born in Cumberland County, Ky., her parents moved the family to New Castle, Indiana, where she grew up with 13 other brothers and sisters, fell in love and married her... View Obituary & Service Information

The family of Evelyn Williams created this Life Tributes page to make it easy to share your memories.

Earthal Evelyn Williams, 85, of Trenton Fl. passed away on Jan...

Send flowers to the Williams family.