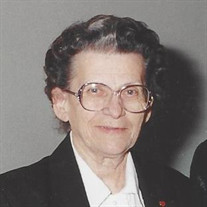 Dorothy Jeanette Caldwell, 97, of Old Town, Florida passed away on Wednesday, October 10, 2018. Mrs. Caldwell was born in Providence, R.I. and moved to Florida in 1955. She was a process control operator at the General Electric plant in St. Petersburg for 20 years. After retirement she moved to Old Town. She volunteered at the Malcom Randall V.A. Medical Center in Gainesville, serving the Veterans for 33 years, for a total of 30,000 hours, also at Cross City Rehab for the last 7 years. Mrs. Caldwell was the V.A.V.S. representative for the Disabled American Auxiliary for the State Dept. of Florida. She was instrumental in starting the youth program at the V.A. in Gainesville. She was also assigned the duty to promote the Adopt A Veteran at the nursing home at the V.A. in Gainesville. She served as president of the Voluntary Executive Committee for two years and as secretary for 12 years. She served on the Woman Veterans Committee. At the local level, she was commander of DAVA, Unit #63 for 10 years and 5 years as treasurer/adjutant for 10 years. She served as commander of DAVA, District #4 for two years. She was also a member of the University of Florida Woman’s Health Initiative serving 15 years. She was preceded in death by her husband of 53 years, William F. Caldwell and daughter, Barbara M. Caldwell. Survivors include a son, William R. Caldwell of Henderson, NV; daughter, Kathleen P. Stone of Old Town; 6 grandchildren, 5 great-grandchildren and 1 great-great grandchild. Funeral services for Mrs. Caldwell will be held 2:00 PM Thursday, October 25, 2018 at the Rick Gooding Funeral Home Cross City Chapel, with Father Joseph McDonald officiating. Interment services will be held 2:00 PM Friday, October 26, 2018 at Florida National Cemetery in Bushnell, FL. Arrangements have been placed under the care of Rick Gooding Funeral Home Cross City, Florida 352-498-5400 and Chiefland, Florida 352-493-0050. Please sign the online guest book at rickgoodingfuneralhomes.com

Dorothy Jeanette Caldwell, 97, of Old Town, Florida passed away on Wednesday, October 10, 2018. Mrs. Caldwell was born in Providence, R.I. and moved to Florida in 1955. She was a process control operator at the General Electric plant in St.... View Obituary & Service Information

The family of Dorothy J. Caldwell created this Life Tributes page to make it easy to share your memories.

Send flowers to the Caldwell family.