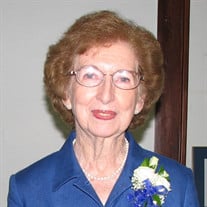 Dr. Doris Scofield Richardson of High Springs, Florida passed away on October 23, 2018. She was born to Hilliard Parker and Annie Pearl Gaines Scofield on April 21, 1930, in Opp, Alabama. Her family moved to High Springs, Florida in 1940 where she resided until her passing. She graduated from High Springs High School in 1948 where she was Valedictorian of her senior class. After graduating from high school, she attended the University of Florida and in 1952 received her Bachelor’s Degree in Education and in 1961 received her Master’s Degree in Education. She received her Ed. D in Educational Leadership from Nova Southeastern University in 1975. Dr. Richardson devoted much of her life to public education having worked for Alachua County Public Schools for 56 years before retiring in 2008. She taught first grade at High Springs Elementary School before being appointed the school’s first female principal in 1975. As a first grade teacher, she was Teacher of the Year in 1968. She also served as principal of M.K. Rawlings Elementary School in Gainesville, Florida from 1983-1988 and Hidden Oak Elementary School in Gainesville, Florida from 1988-2008. Dr. Richardson was an adjunct professor for both Nova Southeastern University and the University of Florida. In 2000, she was one of a group selected as Women Who Made a Difference in the History of High Springs. She married the love of her life, James A. Richardson, in 1950. They were married 49 years before he passed away in 1999. Together they raised two children, James Jr. and Doris Ann. They enjoyed traveling and spending time with family. Doris was a member of the High Springs New Century Woman’s Club. She was a member of the First United Methodist Church of High Springs where she taught Sunday School and sang in the choir for many years. She is survived by her brother, James Hilliard Scofield and wife Betty of Trenton, Florida, son, James A. Richardson, Jr. and wife Janie of Lake City, Florida, daughter, Doris Ann Imler and husband Gary of High Springs, Florida, grandchildren Jennifer Imler and husband Kevin Maher, of Charlotte, North Carolina, Dory Young and husband Thomas of High Springs, Florida, Tony Robinson of Lake City, Florida, Matthew Richardson and wife Andrea of Gainesville, Florida, great grandchildren Mason Maher of Charlotte, North Carolina, Gavin Rarey, Reece Rarey and Kendel Young of High Springs, Florida. Funeral services will be held Monday, October 29, 2018, at 4:00 p.m. at First United Methodist Church, High Springs. Visitation will be one hour prior to the service from 3:00-4:00. Interment will follow at High Springs Cemetery. In lieu of flowers, memorial gifts may be made to The Education Foundation of Alachua County, 2802 NE 8th Avenue, Gainesville, Florida 32641. Arrangements have been placed under the care of Rick Gooding Funeral Home Chiefland, Florida 352-493-0050 and Cross City, Florida 352-498-5400. Please sign the online guest book at rickgoodingfuneralhomes.com

The family of Doris Scofield Richardson created this Life Tributes page to make it easy to share your memories.

Send flowers to the Richardson family.