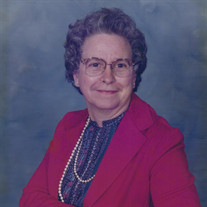 Corine Gallagher Andrews passed away on August 18, 2017, in Bell, Florida where she lived with Thomas and Terry Andrews. She was born on February 5, 1926, in Dover, Florida. She is survived by son, Thomas (Terry) Andrews, daughter Kathy (Glen) Mathis, daughter-in-law Linda Andrews, 7 grandchildren, 15 great grandchildren, brother Bob (Judy) Gallagher, and sister-in-law Judy Gallagher. She was preceded in death by her parents Bessie and Lewis Gallagher, husband Frank Andrews, son Donald Andrews, two brothers Harley and Wesley Gallagher, and sister Alma Gallagher Bartoe. Corine was a member of the Church of Christ. As a preacher’s wife all of her married life, she encouraged Frank as he preached the gospel in Alabama, Florida, Tennessee, and Georgia. Her love of the Lord and His people was the motive for teaching God’s Word. Countless numbers sought her counsel and thoughts on many subjects. There was a smile on her face and kindness in her words, but she always insisted on the truth. She was the ultimate homemaker and loved cooking special meals for everyone. She and Frank operated the Suwannee River Summer Camp for 19 years, having an influence over many young people. Through the years, she cared for the young and elderly when and where she was needed. After the death of her husband, she managed a school food program. Her excellent management skills and good food enabled her to completely refurnish the lunchroom and replace all the kitchen equipment. Truly she was the woman of Proverbs 31. A visitation will be held Saturday, August 26, 2017 at the Chiefland Chapel of Rick Gooding Funeral Home between the hours of 10am and 12 noon with funeral services following at 12 noon. Interment will be held at Chiefland Cemetery. Arrangements have been placed under the care of Rick Gooding Funeral Home, Chiefland, Florida, 352-493-0050 and Cross City, Florida, 352-498-5400. Please sign the online guest book at rickgoodingfuneralhomes.com

Corine Gallagher Andrews passed away on August 18, 2017, in Bell, Florida where she lived with Thomas and Terry Andrews. She was born on February 5, 1926, in Dover, Florida. She is survived by son, Thomas (Terry) Andrews, daughter Kathy (Glen)... View Obituary & Service Information

The family of Corine Andrews created this Life Tributes page to make it easy to share your memories.

Send flowers to the Andrews family.