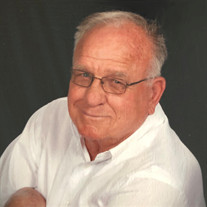 Cary Grant McCollum, Nov. 13, 1937 – Sept. 5, 2020, Held closely in the hearts of his wife and children, Cary Grant McCollum passed away peacefully at home on Sept. 5 after a long illness. Cary was a longtime resident of McIntosh, Fla., and known within his community as a savvy businessman, a gifted storyteller who loved a good laugh, and as a generous friend and mentor. Born in Camden County, Georgia during the depths of the depression in 1937, Cary was the middle of five sons to Charles Lee and Mary Trull McCollum. The family were tenant farmers for most of his early life, moving later to Brunswick, Ga. Cary liked to joke that his family moved so often that any time his daddy fired up the truck the chickens would lay down in the yard and cross their legs. These humble beginnings instilled the value of hard work and a tremendous resiliency in Cary, which, when combined with his sharp mind and entrepreneurial spirit, led to a lifetime of personal and business successes. Cary moved his family to McIntosh from Gainesville in 1977 and opened a meat market in the old ice house with the encouragement of Mr. O. D. Huff, who owned the property. Cary later purchased the entire city block and building, and his Ice House Meat Market was a hub in the community for quality meats, including Cary’s smoked sausages, aged beef, and hogshead cheese, all of which he served up to customers while entertaining them with stories, jokes, and community news. Cary later sold the ice house and founded Superior Truck Tops, manufacturing aluminum truck tops which he distributed throughout the state. Cary was a man of deep faith in God and love of his country. He was an elder of McIntosh Presbyterian Church and a current member of the Church Session. He served in the United States Navy during the Korean War, and also served many years on the McIntosh Town Council as councilman and later as mayor. Many of his good deeds are known only to those who benefited from them. He possessed a great memory and was instantly able to recall people and events of times gone by. For many years he taught the masonic ritual to initiates coming into the Masonic Lodge. Cary’s first lodge was R.T. Schaeffer in Gainesville. After moving to McIntosh, he joined Micanopy Masonic Lodge # 29 where he was active in building lodge membership until health issues curtailed his efforts. On Sept. 4, he was honored by his Masonic brothers for 50 years of service. Cary is preceded in death by his parents, brother Cecil McCollum, son Benjamin Grant McCollum, and former wife Elaine Nolan. He is survived by his wife of 48 years, Linda Cannon McCollum, daughters Bobbie Robinson and husband, Randy; Lindy Brounley and husband, Bob; Katie Deaderick and husband, Lee; and son Silas McCollum. He is survived also by grandchildren, Jason Robinson and wife Sandi; Cary Brounley; Annie Deaderick, Maggie Deaderick, Mark Deaderick, Grace Deaderick; Analyse McCollum Areas and husband Marley; Olivia McCollum; Kerry McCollum; and three great-grandsons, Luke, Jake and Isaac Robinson. He is survived also by brothers, Charles, Clifford and Joe McCollum. Due to the coronavirus pandemic, a private, family service will take place at 10 a.m. on Sept. 26., and will be live-streamed on https://www.mcintoshchurch.org. In lieu of flowers, the family requests gifts be made to Hospice of Marion County or to the Shriner’s Children’s Hospital. As his wife, and the writer of his obituary, I find it difficult to do justice to the embodiment of Cary’s intellect, his compassion, his ability to navigate the social circles through which he lived and the true loyalty and felicity with which he conducted himself. Our memories of him will always be cherished and his stories recalled with great affection and gratitude. Arrangements have been placed under the care of the Rick Gooding Funeral Home Chiefland Chapel, with locations in Cross City 352-498-5400 and Chiefland 352-493-0050. Please sign the online guest book at rickgoodingfuneralhomes.com

Cary Grant McCollum, Nov. 13, 1937 &#8211; Sept. 5, 2020, Held closely in the hearts of his wife and children, Cary Grant McCollum passed away peacefully at home on Sept. 5 after a long illness. Cary was a longtime resident of McIntosh, Fla.,... View Obituary & Service Information

The family of Cary G. McCollum created this Life Tributes page to make it easy to share your memories.

Send flowers to the McCollum family.