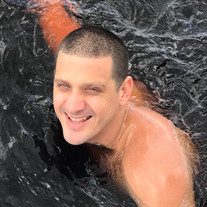 Caleb Aaron Buzbee, loving son, little brother, boyfriend, uncle, cousin, friend, teammate and coach passed away on October 14, 2018. Caleb was born August 24, 1983 and raised in in the First District area of Old Town where he developed his fun and loving personality playing games and joking with his family and friends. He developed an interest in sports and teamed up with one of his best friends and Dixie County great, Nick Collins, to win multiple Pop Warner football championships. Caleb was not an avid sportsman, but as a child was a sportsman by default at times due to the passion his Father and Brother had for fishing and he took pride in catching the ‘family’s biggest bass’ that he caught and that adorned the wall of his home (this is noted in this obituary solely to rub it in his big brother’s face one last time). Throughout his teenage years, Caleb was known for his laid back and friendly personality and great sense of humor. In Caleb’s senior year, in the midst of a state playoff run for the Dixie County football team, he was in a car wreck on his way to school that left him paralyzed and unable to walk. For most folks this would be a major setback, but Caleb’s positive attitude and competitive spirt would not allow him to be held back. He got back into the swing of things quickly and maintained his positive and friendly personality. Caleb returned to school in his Senior year at DCHS just in time to be crowned Prom King by his classmates. Shortly after high school Caleb began a career in coaching, first coaching in the local pop warner football league, then coaching basketball at Ruth Rains Middle School, Santa Fe High School and most recently at Dixie County High School. He was a positive influence on many young men whom he motivated and inspired (and won quite a few ballgames too!) Caleb attended the University of Florida and obtained a degree in Sports Management, He was an avid Gator Fan and enjoyed following Gator sports. Caleb was truly a kind and caring soul with a smile that would light up anyone’s darkest day. Those that were fortunate enough to know him are better for it as his outlook and fortitude was truly inspiring. Caleb was a man that made his mark on the world and his legacy lives on in those he knew. He wasn’t here for a long time, but he made sure it was a good time. Caleb is survived by his mother Gredel Buzbee Burkett, stepfather Buster Burkett, his brother Laney Buzbee Jr., sister-in-law Brianna Buzbee nephew Laney Buzbee III and niece Jadyn Buzbee, his stepsister Macy Burkett, Grandpa & Grandma Burkett, his girlfriend Lauren Johnson, uncles, aunts, cousins and friends who loved him dearly and were blessed to have Caleb be a positive influence in their lives. He was predeceased by his father, Laney Buzbee, Sr. Funeral services will be held at Rick Gooding Funeral Home in Cross City, FL, Friday, October 19, 2018 at 1:00pm. A visitation will be held at the funeral home one hour prior to the service. A graveside service will take place at Ritch Baptist Church Cemetery in Screven, GA Saturday, October 20, 2018 at 4:00 PM. Arrangements have been placed under the care of Rick Gooding Funeral Home Cross City, Florida 352-498-5400 and Chiefland, Florida 352-493-0050. Please sign the online guest book at rickgoodingfuneralhomes.com

The family of Caleb A. Buzbee created this Life Tributes page to make it easy to share your memories.

Send flowers to the Buzbee family.